When Playing Quietly Means Marker All Over the Floor

One mom wrote that she should have known better than to think she could sit down for a few minutes while her 2-year-old twin daughters played nicely together. When she got up to check on the girls, her pleasant feelings were quickly smashed as she saw black marker scribbles on the rug and dining room floor.

She had explained multiple times that crayons, pens and markers were for paper only. The girls knew that writing on walls, floors, furniture, clothes, or skin were all off limits. However, the fun of doing those things was apparently too much to resist.

The girls broke into tears when their mom told them that choosing to draw on the floor also meant they chose to go to timeout. Some parenting experts claim that children that young cannot learn from a timeout. However, when my young son drew on the floor and also earned a timeout, it was the last time he ever did that. Hopefully these girls will only be drawing on paper from now on! 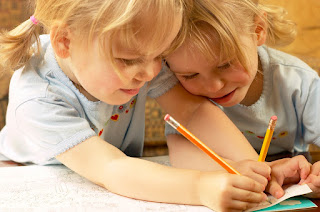 at January 23, 2012
Email ThisBlogThis!Share to TwitterShare to FacebookShare to Pinterest