How to Increase Kids' Compliance with Following Rules

Wouldn’t it be great if your kids always followed your rules? A simple way to increase compliance with rules is to give your children some type of rational for why the rule exists and why the consequences exist.

Watch the video below from Dr. John Medina, author of Brain Rules for Baby, explain and demonstrate this concept.


at September 27, 2012 No comments:
Email ThisBlogThis!Share to TwitterShare to FacebookShare to Pinterest

Introverts Struggling to Fit into an Extrovert World

Is your child an introvert or an extrovert? According to Susan Cain, author of Quiet: The Power of Introverts in a World That Can't Stop Talking, a third to a half of the population are introverts. However, schools and other places children gather are often designed for extroverts.

In her TED Talk, she explains,

"Shyness is about fear of social judgment. Introversion is more about, how do you respond to stimulation, including social stimulation. So extroverts really crave large amounts of stimulation, whereas introverts feel at their most alive and their most switched-on and their most capable when they're in quieter, more low-key environments. Not all the time -- these things aren't absolute -- but a lot of the time. So the key then to maximizing our talents is for us all to put ourselves in the zone of stimulation that is right for us.

But now here's where the bias comes in. Our most important institutions, our schools and our workplaces, they are designed mostly for extroverts and for extroverts' need for lots of stimulation. And also we have this belief system right now that I call the new groupthink, which holds that all creativity and all productivity comes from a very oddly gregarious place."

If your child is an introvert, listening to this talk will give you more insight into the challenges your child may be facing.

at September 24, 2012 No comments:
Email ThisBlogThis!Share to TwitterShare to FacebookShare to Pinterest

When your emotions are high and you’re discussing something you care dearly about, you are in a crucial conversation. You might be talking to your partner about how to handle a situation where your child has misbehaved, speaking to a teacher about how to best work with your child or bringing up a touchy subject with your child. Because of the dynamics, it can be challenging to stay focused and be at your best during discussions like these.

If you’d like to handle these types of conversations better, check out the book Crucial Conversations Tools for Talking When Stakes Are High. It is filled with ideas for performing well when discussing something you care deeply about.

You’ll learn to notice when someone has stopped contributing to the conversation by using silence or violence. You’ll also develop the skills to bring that person back into the dialogue by making the situation feel safer. Improving your abilities in handling crucial conversations will allow you to address important issues while maintaining healthy relationships.


at September 20, 2012 No comments:
Email ThisBlogThis!Share to TwitterShare to FacebookShare to Pinterest

Increasing Motivation to do Homework by Making It a Game

Do your kids ever procrastinate on doing their homework? It’s hard for most people to get started on something they don’t really want to do. How can a task like homework be made more fun?

Difficult tasks become more engaging if they involve the attributes of a game:
Your kids can make homework more like a game by doing the following:
By transforming homework into a game, they will have more fun doing it.  They will also gain the important life skill of writing down what needs to get done and checking it off once it's done. 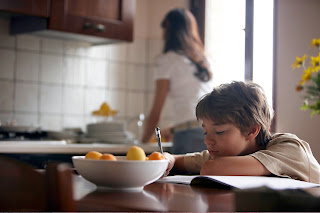 at September 17, 2012 No comments:
Email ThisBlogThis!Share to TwitterShare to FacebookShare to Pinterest

Lying, cheating and stealing are some of the behaviors you do not want to see in your children. So how do you teach your children to be honest?

Being honest is much more difficult than it initially might sound. Being human and being honest don’t naturally go together.

Dan Ariely, a professor at Duke University, has devised clever experiments to measure dishonesty. He details his findings in his book, The Honest Truth About Dishonesty: How We Lie to Everyone---Especially Ourselves. For example, when given the opportunity to cheat on a test to solve math matrices, the average person reports solving 70% more problems correctly than the control group who couldn’t cheat. Wow! 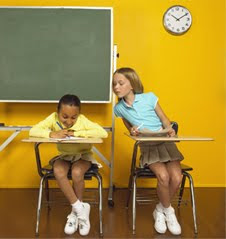 at September 12, 2012 No comments:
Email ThisBlogThis!Share to TwitterShare to FacebookShare to Pinterest

Why does the the AAP discourage media use by children younger than 2?

In the video below, Dr. Ari Brown explains the research behind the American Academy of Pediatrics (AAP) recommendation of limiting media use by children younger than 2.


As part of the third question, researchers have found that if a TV is on with an adult show, a child under 2 will look up at the screen 3 times per minute (every 20 seconds). No wonder kids who are playing in a room that has a TV on are not as engaged in their toys!


at September 10, 2012 No comments:
Email ThisBlogThis!Share to TwitterShare to FacebookShare to Pinterest

Getting Caught Cheating on Chores

When Nancy was staying with her grandparents, one of her chores was to clean up the bird seed on the floor under the parakeet’s cage. One day she was doing this chore but taking a short cut. Instead of sweeping the seed up and putting it in the garbage, she was simply sweeping it under the dresser – a much quicker way to get done!

Her grandfather happened to go by just as she was almost done sweeping it all away. He gave her a disappointed look and said “That’s not how Peterson’s do it.”

She felt horrible she had let her grandfather down and proceeded to clean up all the bird seed by correctly putting it into the garbage. This incident happened when she was 10-years-old. She’s now 60 and says she often remembers this story. It has helped inspire her to make better choices over the last 50 years. 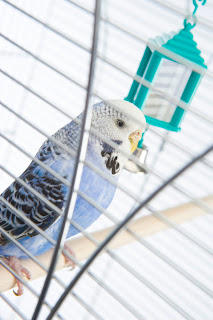