Wild Behavior When Parents Are Not Around

A mom described how well her 5-year-old nephew, Jake, behaved when his parents were around. However, the minute they left, Jake took the opportunity to behave wildly. He seemed to have a lot of pent up behavior bursting to be released.

Most kids save their worst behavior for around their parents because their parents are safe. Their parents will love them and not abandon them regardless if they misbehave. Parents are often dismayed to learn that their child is an angel at school and feel like something must be wrong since their behavior is much worse at home. However, it's normal for kids to "hold it together" at school or someone else's house and then have their meltdowns at home.

Jake did just the opposite - he behaved wildly when his parents weren't around but was well behaved when they were around. Jake's behavior indicates he has not internalized his own reasons for behaving appropriately. He probably behaves appropriately at home due to the consequences of misbehaving. The problem is that it only works well if his parents or someone else is around to administer consequences.

Ideally Jake will learn to regulate his own behavior regardless of whether his parents are around or not. When the only reason kids have for behaving is to avoid punishment, they need to be policed to stay in line. Using a parenting approach that helps Jake learn from his mistakes rather than just learn to avoid being punished will help his behavior improve away from home. 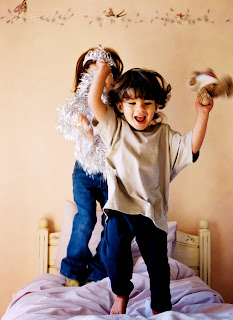 at November 17, 2014 No comments:
Email ThisBlogThis!Share to TwitterShare to FacebookShare to Pinterest

New Release! How To Parent In Ways That Are Truly Helpful, Not Hurtful

This book packs powerful parenting ideas into one or two page topics. You can pick the book up and in a few minutes have a new insight which will help you parent your kids.

This fourth version of the book includes a new chapter called "Leading Your Family with Your Best Parenting".

Below are some of the ideas you'll find in this book. You can also look inside the book on Amazon.