When I was a child I really loved chocolate. Eating chocolate simply filled me with happiness. In fact I enjoyed it so much that one year for my birthday the gift I asked for was chocolate. I was delighted to see a big bowl of Brach’s chocolates by my plate that birthday dinner!

Halloween was my favorite holiday because it involved the very fun part of dressing up and then going trick-or-treating to receive lots of delicious chocolate! Tonight I’m looking forward to the trick-or-treaters who will be ringing our doorbell. I have a large supply of chocolate candy which I will undoubtedly have to sample beforehand to make sure it’s ok for the kids.

I hope you are able to enjoy some Halloween magic with children tonight! 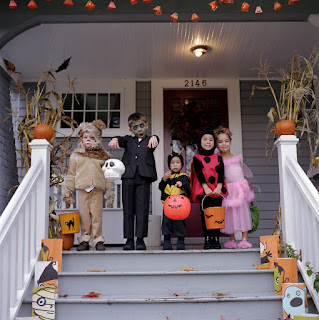 at October 31, 2011 No comments:
Email ThisBlogThis!Share to TwitterShare to FacebookShare to Pinterest

Do your children ever forget to say thank you? Most children need quite a few reminders from their parents before they reliably remember on their own.

If your kids could use a little practice in saying thank you, Halloween provides a perfect opportunity! Before they go trick-or-treating, review how they should respond when someone gives them a treat. Try role playing different situations to give your kids an opportunity to practice before the real thing.

When they are out trick-or-treating they may still need a few gentle reminders as the excitement of the evening can cause kids to forget. Practicing on Halloween will help them improve their gratitude skills! 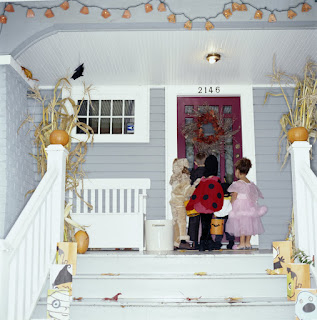 at October 27, 2011 No comments:
Email ThisBlogThis!Share to TwitterShare to FacebookShare to Pinterest

Turning Off the Radio to Listen to His Daughter

When you drive in the car with your children, how do you typically interact? Are you each in your own worlds with the kids watching a DVD while you listen to the radio?

One dad recently completed a Priceless Parenting online parenting class and was inspired to look at how he was spending his time with his 4-year-old daughter. He decided to make some changes and wrote "I've gotten into the habit of turning off the radio, and simply talking, and mostly listening to my daughter during our drives home from her Mother's home. It has really brought us closer together, and she seems to be more respectful towards me as a result."

She sounds like one lucky girl to have a dad who makes space to listen to her! 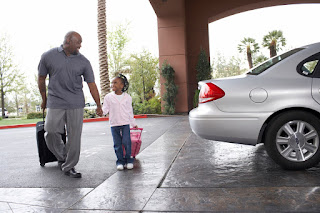 at October 24, 2011 No comments:
Email ThisBlogThis!Share to TwitterShare to FacebookShare to Pinterest

Are You a Sounding Board or a Sponge?

The next time your children come to you with a problem, try listening and asking them what they think they are going to do about it. Help them think through the consequences of different solutions and then leave the choice of how to solve the problem up to them. 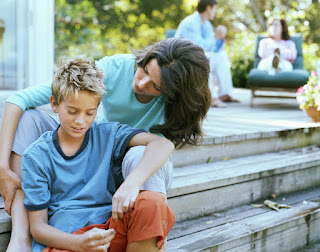 at October 20, 2011 2 comments:
Email ThisBlogThis!Share to TwitterShare to FacebookShare to Pinterest

A mom recently told me how frustrated she was to be continually doing most of the housework while her husband relaxed watching TV and her kids goofed around. They took it for granted that she would get things done and she was feeling resentful and unappreciated. Since her kids were 10 and 12-years-old, they were certainly capable of helping out but they rarely did.

What can you do if you find yourself being your family’s servant and want to change the situation? One approach is to call a family meeting to create a plan for dividing up the household chores.

Begin the meeting by writing down all the tasks that needed to be done in order to keep your home functioning. Try to include everything from bringing in the mail and buying groceries to paying bills.

Next estimate how often each task needed to be done. For example, how often does your family agree the bathroom should be cleaned? The bedding washed? The floors vacuumed?

You can plan to have another family meeting in a week to check with everyone on how things are going and if anyone wants to change chores. Posting the chore list in a central location can help everyone remember their commitments. It can also be helpful for children to have their own chore list so they can easily check it off.

Balancing the workload will help everyone feel like an important contributor to your family’s success! 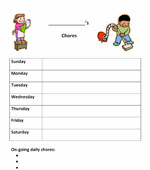 at October 17, 2011 No comments:
Email ThisBlogThis!Share to TwitterShare to FacebookShare to Pinterest

What will your children's legacy be?

One of the gifts Steve Jobs, co-founder of Apple, left the world was the commencement speech he gave at the Stanford College graduation in 2005. This speech captured the wisdom he had learned from his experiences - wisdom that can help us as parents.

Dreams for Your Children

His biological mom only agreed to sign the adoption papers after the couple agreed they would send Steve to college. Did they keep their promise? Yes. He attended Reed College for six months before deciding the cost of spending his parents' savings wasn't worth it.

Although he dropped out of college, he found a way to attend some of the classes that interested him the most. While he did not attend college in the way his biological mom hoped he would, he did learn what he needed to know to pursue his own dreams.

What type of work do you hope your children will someday have? Your children are deeply attuned to your desires for them.

at October 12, 2011 No comments:
Email ThisBlogThis!Share to TwitterShare to FacebookShare to Pinterest

Whenever she came home from work, the first thing Mary liked to do was change into more comfortable clothes. This simple task was made less pleasant by her young son, Ryan, since he always seemed to cause trouble during this time. Why couldn’t he just behave for a few minutes while she changed?!

One day it dawned on Mary that Ryan was desperate for some of her attention and preferred negative attention over no attention at all. She changed the dynamics by establishing what she called Ooshee, Whooshee, Gooshe Time.

Instead of immediately changing her clothes after work, the first thing she did was sit down with Ryan for their 5 to 10 minutes of Ooshee, Whooshee, Gooshe Time. He got her undivided attention for whatever he wanted to discuss or do. Having this special time together seemed to make the rest of the evening go so much better. 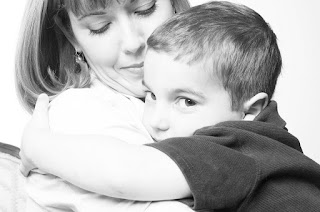 at October 10, 2011 2 comments:
Email ThisBlogThis!Share to TwitterShare to FacebookShare to Pinterest

Suicide Without a Warning

I’ve recently spoken to two moms whose teens were suicidal. Neither thought their teen was thinking of killing themselves. They didn’t see any warning signs.

In one case, Diane had noticed her daughter, Chloe, had been overreacting to little things at home. Diane thought maybe it was from the pressure of the new school year or perhaps just hormones. However, when Chloe blew up at her brother for supposedly losing her hairbands (which in fact Chloe had accidentally tossed in with the dirty laundry), Diane decided to make an appointment for Chloe to see the school psychologist.

After seeing Chloe, the psychologist immediately called Diane. This was serious. Chloe had a plan for how she was going to kill herself. Diane was shocked; she had no idea that Chloe had even considered killing herself. Chloe entered an in-patient treatment program and got the help she needed.

The other mom, Susan, also did not see any suicide warning signs in her 16-year-old son Ryan. Susan and Ryan’s father had both volunteered for a few years on a suicide prevention hotline so they were well aware of the warning signs. Ryan planned out his suicide without either of his parents realizing what was going on. Tragically, he succeeded in killing himself last month.

Losing a child to suicide is a parent’s worst nightmare. What can we do to help prevent this type of tragedy with our own children? One thing we can do is discuss our concerns around suicide with our teens. We can ask them “Have you ever thought about killing yourself?” Asking the question won’t plant the idea in their heads, however, it will give them the opportunity to talk.

Do you really need to bring up such an unpleasant topic with your teens? Yes, you do. The 2009 Youth Risk Behavior Survey conducted by the Center for Disease Control and local schools found that one in 16 high school students had attempted suicide in the previous year.

If you'd like more information about youth suicide and talking to your teens, check out the Parent Resource Program by the Jason Foundation.

at October 06, 2011 No comments:
Email ThisBlogThis!Share to TwitterShare to FacebookShare to Pinterest

Fighting or Sticking Together?

I heard a story at church about a mom who one day sat down in her backyard with a book to enjoy a few moments of quiet pleasure. No sooner than she was settled into her comfortable chair when she heard her children and their friends begin fighting with each other. This was not the first time that she had been disturbed by their bickering.

She called them over. When they reluctantly made it to her, she asked them to each get two sticks. They set off to get their sticks and soon they were arguing over who had a certain stick first and whose sticks were better.

When they finally brought the sticks to her, she asked them to each give her one of their sticks. She tied these sticks up with a ribbon. She then asked the children to break their remaining stick. Each child was easily able to break their stick.

She explained to the children that they are each like one stick that can easily be broken. However when they stay together like the bundle of sticks, they are stronger. It was a wonderful demonstration of the power of sticking together instead of fighting! 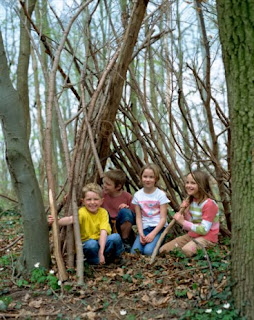