Getting Enough Sleep to Parent Well

How important is sleep? It’s critical! In fact it’s essential to living and people with the rare disease fatal familial insomnia actually die from being unable to sleep.

Lack of sleep can lead to depression, headaches, inability to concentrate and difficulty controlling emotions. How is this related to parenting? If you are not getting enough sleep, you won’t be able to do your best parenting.

One Dad I recently spoke to had set up his schedule so that he worked the evening shift from 10:00 PM to 6:00 AM. After working, he came home and fed his 6 and 10-year-olds breakfast before getting them off to school. He then caught a quick nap before his 2-year-old woke up. Since his wife worked during the day, he was then up with the 2-year-old until she took a nap in the afternoon.

His schedule was set up so that he regularly got 4 or 5 hours of broken sleep. He wanted to be a loving parent for his kids but he found himself sometimes lashing out at his kids. He had been beaten as a child and did not want to beat his children; however, he did exactly that one day when his son misbehaved.

His lack of control with his son was a huge wake-up call for him. He knew he needed help and the first step was figuring out a new schedule so that he would regularly get enough sleep. Without enough sleep, he would not be able to be the parent he wanted to be. 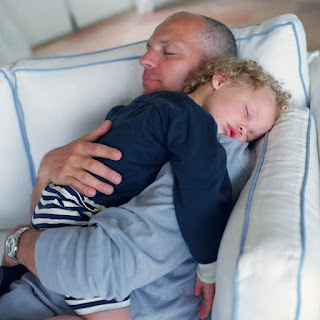 at June 28, 2012 No comments:
Email ThisBlogThis!Share to TwitterShare to FacebookShare to Pinterest

Are you concerned about your child entering puberty too soon?

If you are interested in hearing a doctor discuss precocious puberty, you can watch this 10 minute discussion from the Khan Academy:

at June 25, 2012 No comments:
Email ThisBlogThis!Share to TwitterShare to FacebookShare to Pinterest

Do you ever disagree with your spouse or partner on how to parent your kids? Most couples find they have different ideas on a number of parenting issues.

Solving Your Parenting Disagreements
by: slattenk

at June 21, 2012 No comments:
Email ThisBlogThis!Share to TwitterShare to FacebookShare to Pinterest

One Mom's Secret for Handling Begging at the Store

Often when they went grocery shopping, 6-year-old Matt would beg his mom to buy something. Kari was tired of negotiating with Matt and explaining why she wouldn't be buying what he wanted. She decided she needed a new approach to their shopping trips.

Before she went shopping the next time, she sat down and wrote a list of everything she planned to buy. When they got to the store, she gave the list to Matt along with the duty to check things off as they put them in the cart.

When Matt wanted something her to buy something not on the list, she'd ask him to check if it was on the list. If he couldn't find it on the list, then they weren't buying it today. To Kari's amazement, Matt offered to help make a better list next time but he stopped begging her for things not on the list! 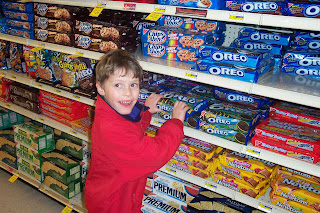 at June 18, 2012 No comments:
Email ThisBlogThis!Share to TwitterShare to FacebookShare to Pinterest

Are your kids smart about money? There's a lot to know about finances. How do you know what to teach your kids at different ages?

The financial problems in the United States prompted the creation of the Money as You Grow web site. It's described as providing "20 essential, age-appropriate financial lessons — with corresponding activities — that kids need to know as they grow. Written in down-to-earth language for children and their families, Money as You Grow will help equip kids with the knowledge they need to live fiscally fit lives. The lessons in Money as You Grow are based on more than a year of research, drawn from dozens of standards, curricula, and academic studies."

For example, kids ages 6 to 10 should be involved in comparing prices and begin understanding how interest in a savings account works. By the time your child is 14 to 18-years-old, you should discuss how a credit card bill should be paid off every month. One Dad missed this discussion with his daughter and was amazed that she didn't realize she would be charged a huge amount of interest if she didn't pay off the full amount. She was in her early 20's when she learned this expensive lesson.

Prepare your kids now to be financially knowledgeable using this helpful site. 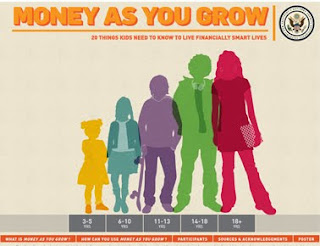 at June 14, 2012 No comments:
Email ThisBlogThis!Share to TwitterShare to FacebookShare to Pinterest

Do your kids know the difference between tattling and telling?

Do you give your kids the following two conflicting messages? The "don't tattle" message often comes across loud and strong from the kids' peer group. One group of kids said they would never tattle because "Snitches get stitches." No wonder they're scared to tell!

How can you help your kids see the difference between snitching and reporting? When someone is snitching or tattling, the underlying goal is to get another person in trouble by making the problem bigger and more public.

On the other hand, the goal of telling or reporting is to correct something that is wrong. Your child is telling you or another adult because the problem is too big for her to handle.

So if your children are wondering if what they are about to say is tattling or telling, they can ask themselves "What is my goal?" If they realize they are really trying to get their sibling in trouble, then it's tattling. However, if it's a problem that they truly need assistance in solving or someone is in danger, than it's telling.

Talking through a few pretend scenarios can help your kids figure out when they should be telling and when they can probably handle it on their own. 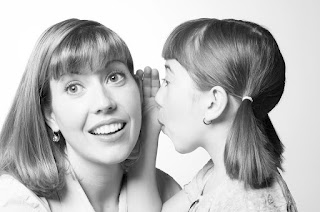 Turning Summer Boredom into Opportunities to Grow and Learn

How will your children be spending their time this summer? Summer vacation with time off from school provides many opportunities for growth, fun and also trouble. It's the trouble that you want to avoid!

Concerns about How Kids Will Spend Their Free Time

When I recently asked a group of parents some of their concerns were: A number of the concerns these parents expressed revolve around the fact that they and their children have different priorities.

Developing a Plan for a Successful Summer 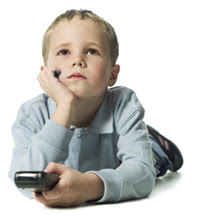 at June 06, 2012 No comments:
Email ThisBlogThis!Share to TwitterShare to FacebookShare to Pinterest

Brain Science Tools to Help Your Children Better Understand Themselves

You've probably heard of the idea of connecting with your child's emotions before attempting to correct any misbehavior. Why is this a better strategy than just yelling at your kids if they're misbehaving?

Brain researchers now know enough about how children's brains operate and grow to explain why certain parenting reactions are better than others. In their book, The Whole-Brain Child: 12 Revolutionary Strategies to Nurture Your Child's Developing Mind, Survive Everyday Parenting Struggles, and Help Your Family Thrive

, Dr. Daniel Siegel and Tina Bryson give practical tips for parents based on the latest research.

They provide useful ideas for responding when children are reacting emotionally. These responses help kids integrate their experiences. In their book they describe "That's what integration does: it coordinates and balances the separate regions of the brain that it links together. It's easy to see when our kids aren't integrated - they become overwhelmed by their emotions, confused and chaotic. They can't respond calmly and capably to the situation at hand. Tantrums, meltdowns, aggression, and most of the other challenging experiences of parenting - and life - are a result of a loss of integration, also know as dis-integration."

This book will give you tools for helping your kids handle the more challenging parts of life.