Recently I’ve read a number of stories where people are upset by parents who are not appropriately responding to their children’s misbehavior. When children are irritating others or destroying other’s property, parents have a responsibility to step in and set some limits. These are some examples of situations where parents were not responding and others were becoming upset:
Although it can be especially difficult to handle misbehavior in public situations, parents have a duty to do so. If you’re struggling for effective ways to handle your children’s misbehavior, taking the Priceless Parenting online parenting class will give you plenty of practical ideas.


Nancy Hanauer, founder of Hop to Signaroo, explains “Signing reduces the frustration you and your baby feel when your little one can't express his or her needs.” You can learn basic sign language from various websites, books and classes (if you live near Seattle, you can take one of Nancy's awesome classes!). Nancy recommends Li'L Pick Me Up! Fun Songs for Learning Signs (ASL) Baby Sign Language.

at October 26, 2009 No comments:
Email ThisBlogThis!Share to TwitterShare to FacebookShare to Pinterest

At a recent parenting presentation, one mom of 4-year-old twins and a 5-year-old complained about how tired she was of hearing potty talk. One child would say something like “poopy pudding” and soon the others would join in with “fart face” and more potty talk. She had tried everything from ignoring it to giving time outs and nothing stopped it.

Another mom explained what worked for her. She told her children that potty talk needed to be done in the bathroom. They were welcome to go into the bathroom, shut the door and enjoy as much potty talk as they wanted! 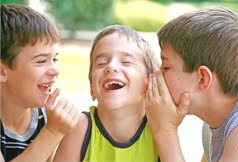 at October 22, 2009 No comments:
Email ThisBlogThis!Share to TwitterShare to FacebookShare to Pinterest

What exactly do you do if you walk in on your preschoolers and find they are “playing doctor”? What is normal behavior and what isn’t? What are your beliefs about teens and sex? Thinking through some of these questions ahead of time can make discussions with your kids much easier.

Birds + Bees + YOUR Kids by Amy Lang provides practical information on what kids should know by when along with facts on various aspects of love, relationships and sexuality. It provides questions to help parents think through their beliefs about sexuality and how those beliefs influence the discussions they have with their children.

From discussions of “playing doctor” and self stimulation to sexually transmitted diseases, this book provides a solid foundation for parents. Reading this book can help you be better prepared for these sometimes tricky conversations!

at October 19, 2009 No comments:
Email ThisBlogThis!Share to TwitterShare to FacebookShare to Pinterest

Motivating kids in the morning

When he reminded her about something going on that day that he knew she would love, she got out of bed much easier. Saying things like “Today is sharing day!”, "You get to paint at school today." or “Guess what? It snowed last night.” would quickly get her out of bed without any complaints.

at October 15, 2009 No comments:
Email ThisBlogThis!Share to TwitterShare to FacebookShare to Pinterest

Do your children's words ever take you by surprise because they sound remarkably like something you've said? These "boomerang words" can be a good thing or not such a good thing.

When we hear our children repeat our words, it's a strong reminder of just how much they are picking up from us. We also get a new appreciation for how those words feel to the person receiving them!

Where have I heard that before?

One mom told me that she was in her 6-year-old daughter's bedroom when she accidentally knocked a toy off her dresser. Her daughter exclaimed "Mom, next time could you be a little more careful!" This mom was taken aback by this rather rude sounding comment.

When his children had problems, John often responded to them "Well, it's not the end of the world." This phrase came back to haunt him one night when they were out camping in a trailer. 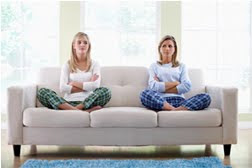 at October 12, 2009 No comments:
Email ThisBlogThis!Share to TwitterShare to FacebookShare to Pinterest

One mom reported that she and her husband had gone shopping with their two children. They purchased a scooter for their 4-year-old daughter and a large toy plane for their 2-year-old son. Both children were happy with their selections at the store. However, when they got home her son also wanted to be able to ride the scooter.

Since both children wanted to use the scooter at the same time, Mom helped them figure out how they could take turns. Although she taught them to use a timer to keep track of how long each child had, her daughter sometimes “helped” the timer along when it was her brother’s turn. He then protested that his turn was too short.

Mom got tired of the arguing and approached her husband about buying another scooter to fix the problem. Her husband thought this would only be a temporary fix and that the children really needed to learn to share. How would you have handled this situation? 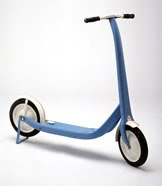 at October 08, 2009 No comments:
Email ThisBlogThis!Share to TwitterShare to FacebookShare to Pinterest

Responding to “I hate you!”

When children yell “I hate you!” strong emotions are certainly being expressed. Perhaps you just told your child “no” to something she requested so you know why she is upset. In this case, you may want to respond with something like “I know you’re angry and I want you to know I’ll always love you.” This shows empathy while avoiding arguing.

Responding with “Don’t you ever say that to me!” or “How dare you talk to me like that!” will fuel the fire. While we would prefer our children not to say “I hate you”, by demanding that they not say it we are setting ourselves up for a potential power struggle. We are also teaching them how to push our buttons!

If it’s unclear why our child said “I hate you!”, find out by asking “I hear you’re upset. What’s going on?” This response gives us the opportunity to better understand our child.

It can be hard not to get defensive and yell right back at our child. However, taking the high road will build a more positive relationship. 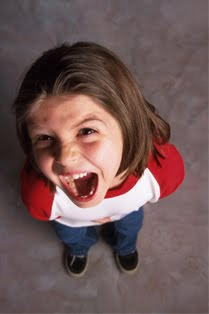 at October 05, 2009 No comments:
Email ThisBlogThis!Share to TwitterShare to FacebookShare to Pinterest

Jane described how her 11-year-old son, Nick, learned how easy it was to go through money after he got a debit card. He started his account with $250. Jane explained to him that if he withdrew money from an ATM with his bank, there was no fee otherwise there would be a $2.50 fee per withdrawal. He quickly replied that he understood.

He loved using his debit card to get money out for spending! While on vacation, he found many items to purchase like a cool stunt kite for $40. The campground game room had video games which took quarters. He bought some for himself and his brother who currently was out of money.

Jane reminded Nick that the reason his younger brother didn’t have money was that he didn’t save and may not be able to pay Nick back for awhile. Nick was happy to share his money with his brother since he had plenty of money he could get with his debit card.

Since Nick spends half his time at his dad’s house, Jane didn’t always know when Nick was using his debit card. One day Jane got an email notice from the bank that Nick was out of money in his debit account. Nick could not believe he was out of money! Jane printed out the statement of all the withdrawals. A number of withdrawals were from ATMs not associated with their bank. Nick was surprised to see that taking $2.50 out for each withdrawal really added up.

Nick decided to give his mom the debit card to hold. He thought the temptation to use it was too great and he wanted to work on saving up some more money. Jane used this experience to also discuss how easy it is for people to get in debt with credit cards. Nick learned a lot from his debit card experience! 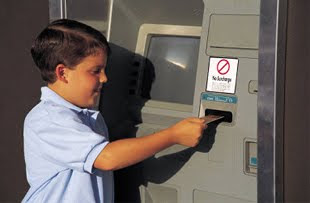