Babies are a target market for various digital devices and apps. Are these apps mesmerizing to babies? Yes! Is this the perfect solution for busy parents to keep their babies entertained? No!

The American Academy of Pediatrics discourages media use by children younger than 2 years. It’s not because they are out to make parents’ lives miserable but rather that the research shows negative impact on babies. Dr. Ari Brown summarizes the research in the first 12 minutes of a video explaining the AAP recommendations.

Although most of the current research is on exposure to TV , we know that babies’ brains are wired based on the input they receive. We have plenty of case studies showing that babies who don’t get enough loving interaction with adults suffer in their development of social skills (you can read a few of these studies in Dr. Bruce Perry’s book, The Boy Who Was Raised as a Dog).

I received a press release last August from Red Wagon Software stating “Red Wagon Software announces the release of “Bonk! Bonk!” – its debut iPad and iPhone app for toddlers. Founded by Bill Brisky – a former Microsoft programmer – Inspiration for the endeavor started when Brisky’s infant son Paul became enamored with his father’s iPad and would delight in tapping images on the screen. Seeing his son’s obvious joy, Brisky created “Bonk! Bonk!” – an interactive app where every time Paul would tap the screen a sound and colorful image would suddenly appear mesmerizing him for hours.”

An infant who is being mesmerized for hours by an iPad app is definitely having his brain development significantly impacted. While it will take years of research to determine the effects, based on what we know about brain development there is reason to for serious concern.

What babies need is lots of one-on-one time with loving adults to build their social skills. When those opportunities are missed in the first two years, the results can be devastating for the child. 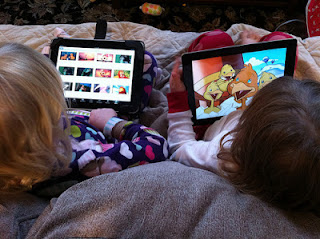