Recently I spent time with a family whose 3-year-old was seriously testing his parent’s patience by asking "why?" after almost everything they said. Their older boys had not gone through the stage of relentless "why?" asking and they certainly wished Caleb would have skipped this stage too! They were ready to scream the next time he asked that question!

What's going on with young children that cause them to act like this? According to the Adlerian theory of behavior, children's behavior has a purpose with the goal of feeling belonging and significance. By looking at Caleb's behavior from this viewpoint, he feels a sense of belonging when he can participate in the conversation. Given his limited conversational skills at this age, one of the easiest ways he can continue the conversation is by asking "why?"

He also gains a sense of significance since asking "why?" typically gets a response from his parents. They can sometimes get a break by asking him in return "Why do you think that happened?" Soon Caleb will develop more sophisticated conversation skills, but until that day they are working on their patience! 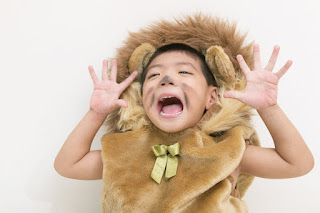 at September 13, 2010
Email ThisBlogThis!Share to TwitterShare to FacebookShare to Pinterest