What would your kid do?

We’d all like to believe our children would make the right choice when presented with a challenging situation like whether or not to answer the door to a stranger. But would they make the choice you hope they’d make?

"The Perils of Parenting" program, produced by NBC's Dateline, tested kids in tough situations like these:
They tested these situations using hidden cameras where the parents were in a room watching as the scenes unfolded. Parents knew the choice they hoped their children will make – but often they expressed doubt as to whether their child would really make the wise choice. In this unscientific test, parents who periodically drilled their kids on what to do in situations like these made better choices.

What would your child do? This show just might encourage you to have a few more discussions with your children about handling tough situations! 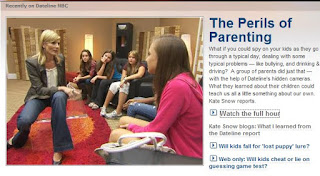 at September 16, 2010
Email ThisBlogThis!Share to TwitterShare to FacebookShare to Pinterest