If you're the parent of a young child, you play a huge role in how your child reacts to being left in someone else's care. Your child looks to you for clues on how to respond in various situations.

You've probably seen your child look at you after falling down to see how big a deal it is. If you react with fright, your child breaks into tears; if you say something like "Oops, you fell down." your child gets up and continues playing.

Similarly, when dropping your child off at somewhere like preschool, your child looks to you for how to respond. Recently, two-year-old Ben's parents were dropping him off at church school. Ben happily began playing with the cars.

Mom and Dad both asked Ben if he needed anything before they left. He continued playing. Dad asked "Do you want a hug?" Ben continued playing without responding. Dad asked again and then finally said "Well, Daddy needs a hug!" At that point Ben gave both his parents a hug and guess what? Ben was no longer feeling confident about being left behind!

Ben's folks had added drama to the drop off. He picked up on their discomfort with leaving him and now wanted to go with them! A short good-bye given in a matter-of-fact way would have worked better in this situation. 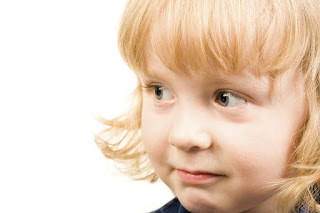 at November 29, 2010
Email ThisBlogThis!Share to TwitterShare to FacebookShare to Pinterest